Are you ready for the Rock & Roll Express Tour this summer?? That’s right, 3 Doors Down are joining forces with Collective Soul for a huge co-headlining tour that will take them across all the major cities in the US, coming to the Freedom Hill Amphitheatre on Tuesday 7th August 2018! Here’s your chance to be in the crowd – get your tickets NOW while they last!! 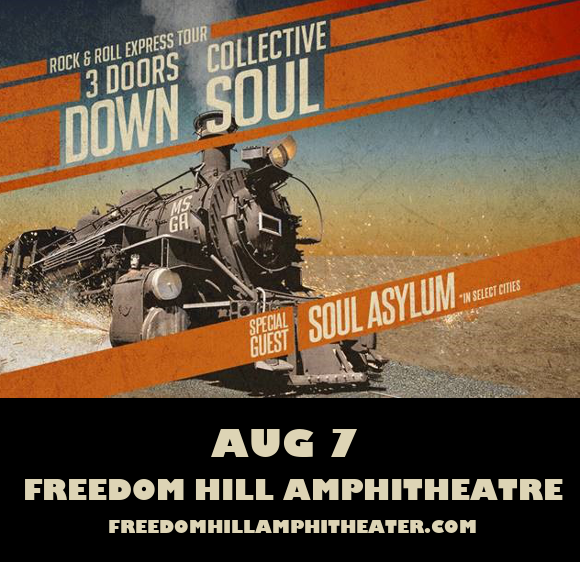 Formed in 1996 and currently consisting of band members Brad Arnold, Chris Henderson, Greg Upchurch, Chet Roberts, and Justin Biltonen, 3 Doors Down rose to worldwide recognition with their smash hit single “Kryptonite,” which hit the top 5 of the Billboard Hot 100 chart. Their debut album, “The Better Life,” was released in 2000. One of the best-selling albums of the year, it has since been certified Platinum no less than a staggering SIX times!!

The band are touring with their most recent release, “Us And The Night,” which charted in the top 20 of the Billboard 200 and performed well in other countries too, as well as being reviewed well by critics; “Us and the Night the reconstituted 3 Doors Down have decided to look on the sunny side of life,” were the warm words from Allmusic.

Get ready to hear the songs from the latest album in addition to the hits you know and love – get your tickets NOW for your chance to see 3 Doors Down and Collective Soul live!!