Get ready for a 90s summer!! The Offspring and 311 are teaming up for a massive North American tour! It’s all happening at the Freedom Hill Amphitheatre on Tuesday 14th August 2018 – be there!! Get your tickets NOW before they sell out – hit the “buy tickets” button above! 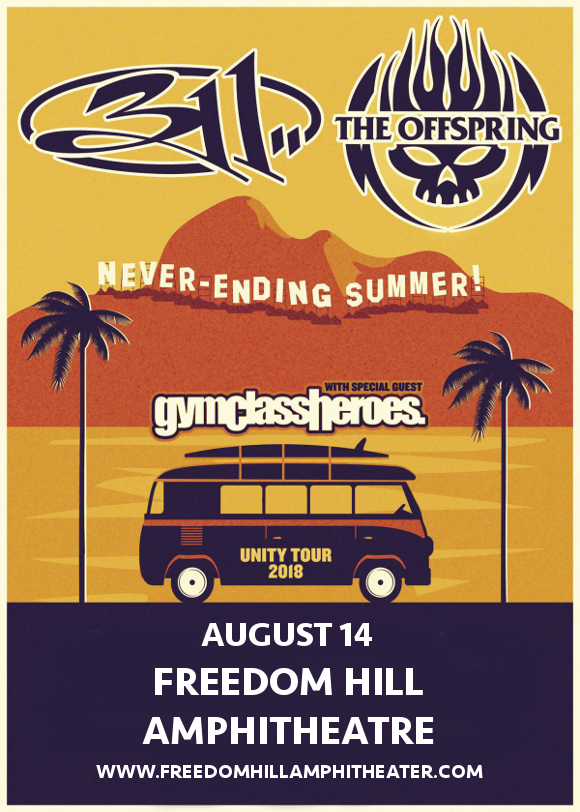 Formed in 1988 by Nick Hexum, Jim Watson, Aaron "P-Nut" Wills and drummer Chad Sexton. They established a following with their first two albums, “Music,” and “Grassroots,” and later achieved mainstream success with their self-titled triple album, which charted on the Billboard 200 thanks to the hit singles “Down,” and “All Mixed Up”. Following this their success soared, with a stream of successful albums up to and including last year’s “Mosaic”.

The Offspring need no introduction – formed in 1984 and currently consisting of band members Dexter Holland, Greg Kriesel, Noodles, and Pete Parada, over the course of their 34-year long career The Offspring have been responsible alongside Green Day and Rancid for reviving mainstream interest in punk rock. With sales of 40 million around the world, they are one of the best-selling punk rock bands of all time. They’ve confirmed that they have an upcoming 10th studio album in the works, the follow-up to 2012’s “Days Go By”.

Get ready to experience both these incredible acts live – have you got your tickets yet?? Hurry, they won’t last long!!