There are loads of awesome co-headlining tours hitting the road this summer, but none of them are gonna be quite as fun as the team-up between AJR and Quinn XCII! A match made in heaven, these indie-pop maestros will have the party going hard as they play a night full of hits to make you dance like crazy! The "Bang!" trio and "Two 10s" singer and rapper are headed to Freedom Hill Amphitheatre on Wednesday 5th August 2020, and they're bringing with them emo-rap support act Hobo Johnson and The Lovemakers to complete the perfect line-up! 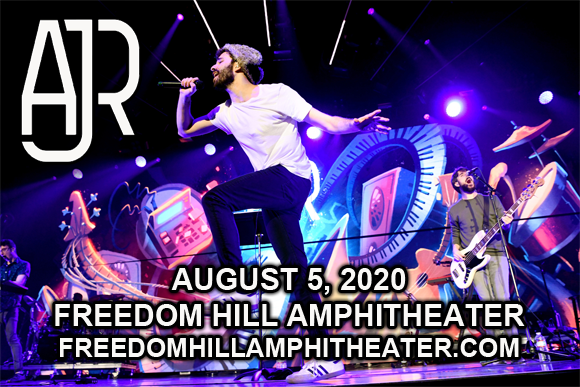 Despite each member still only being in their 20s, indie-pop band AJR has been writing, recording and performing together for over a decade. The trio is formed of multi-instrumentalist siblings Adam, Jack, and Ryan Met, who began by recording, producing and mixing cover songs in a makeshift studio in their New York City living room back in 2006. Six years later, their big break came when Australian singer-songwriter Sia heard their song "I'm Ready" and put them in touch with former Columbia president Steve Greenberg, who became their manager. The song was released as single the following year and did well, reaching number 27 on the Billboard Mainstream Top 40 chart. Two years later, they released Living Room, their debut studio album, and in 2017 they followed with The Click. The Click launched several singles, including the platinum-selling hit "Weak," which reached number 8 on the U.S. Billboard Dance Club chart, and "Drama," as well as featuring the track "Sober Up" with Weezer's Rivers Cuomo. Neotheater, the band's third studio album, was released in 2019 and reached number one on the Billboard Top Rock Albums chart, as well as debuting at number 8 on the Billboard 200 – their highest-charting album so far.