Blackberry Smoke, The Allman Betts Band, Jaimoe & The Wild Feathers are all coming down to Freedom Hill Amphitheatre on Friday 24th September 2021 (Rescheduled from Saturday 31st July 2021)! The talented Blackberry Smoke have exceeded all expectation over the years, with a groundbreaking collection of hit records! 2021 brings them back to the stage for another celebration of their incredible music! Join them for a feel good summer night of southern rock entertainment… 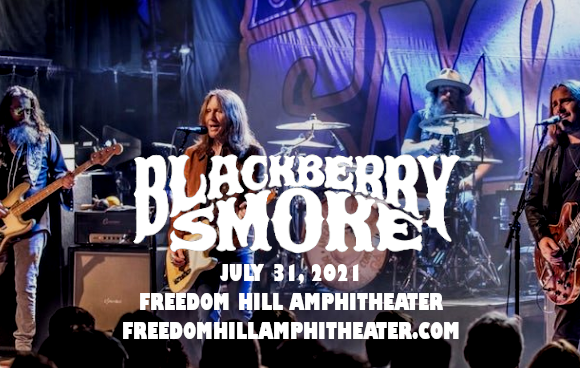 The amazing Georgia band, Blackberry Smoke have become a firm favorite on the Southern Rock scene ever since they first came to light back in 2003 with their debut album release of Bad Luck Ain't No Crime. The group started it all off with some groundbreaking performances across the US as they hit the road supporting superstar names such as Zac Brown Band, Eric Church, ZZ Top and Lynyrd Skynyrd! This incredible early on triumph kick started their success and gain their initial fan base as they performed to the crowd.

With their newly founded success, Blackberry Smoke followed it up with another album in 2009 – Little Piece of Dixie, the record became a highlight on the music scene and was noted by magazines as one of the must listen to records of the entire year. But it wasn't until their third studio release, that took their career to the next level and placed them into the Billboard charts for all to see! The Whippoorwill shook North America with it's wide appeal and made it into the top 40.

Blackberry Smoke's beloved soundscape matches up so flawlessly with other psychedelic, southern rock groups and in 2016, Blackberry Smoke joined Gov't Mule for their summer tour, they also gained success for their album Holding All The Roses which escalated to the number one spot on the Billboard Country Album charts!

With already a long list of albums under their belts, Blackberry Smoke have truly been making their mark on music history, with their records ever since hitting the top positions within the Country, Americana/Folk and UK Rock charts. The band just keeps on giving and Blackberry Smoke plan to make the summer in 2021, the best one yet!

Join this incredible bunch of musicians as they hit the road and are joined by The Allman Betts Band, Jaimoe & The Wild Feathers – tickets are NOW available above to purchase… get on down for a night of pure musicianship at it's finest!