It's not the end of the road. In fact, all roads have been opened, leading to Freedom Hill Amphitheatre as top-notch RnB vocal group, Boyz II Men are head to take center stage on Thursday 26th August 2021. They're back on the road to bring some sweet serenade to their devoted fans as they perform their smash hits "On Bended Knee," "End of the Road," "In the Still of the Nite (I'll Remember)," "It's So Hard to Say Goodbye to Yesterday," "I'll Make Love to You," "Water Runs Dry", "A Song for Mama," among many others. Boyz II Men are seasoned music entertainers who can easily summon a full house. Fans are wasting no time in getting tickets to the show. Save the date and lock in your seats a.s.a.p. ! The quickest route is to click on the 'Get Tickets' link on this site. Book your tickets now! 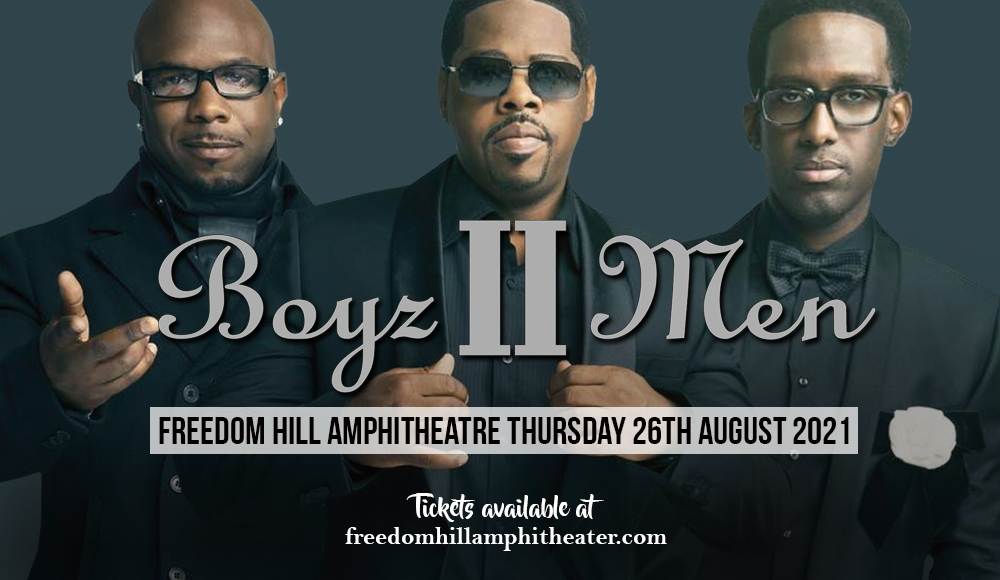 Initially inspired by the new jack swing movement, Boyz II Men took that sound and infused smooth four-part a cappella harmonies with doo-wop that meets hip-hop. Formed in 1988, composed of vocalists Nathan Morris, Marc Nelson, Wanya Morris, Shawn Stockman, and Michael McCary, Boyz II Men had an irresistible crossover appeal that brought them to the global stage. Their initial wave of top 5 singles "Motownphilly" and "It's So Hard to Say Goodbye to Yesterday" in 1991, followed by the number one single "End of the Road" in 1992. "End of the Road" set the bar at number one, staying on the Billboard Hot 100 for a whopping thirteen weeks. Then they, themselves, broke their own record as "I'll Make Love to You" and "One Sweet Day" (with Mariah Carey), hit and stuck around the number one spot, for fourteen and sixteen weeks respectively.

Boyz II Men added another feather in their cap as they joined the 'Billboard's elite circle' with regard to time spent at number one in Billboard history, garnering 50 cumulative weeks– joining the elite company of Drake, The Beatles, Rihanna, Elvis Presley, and Mariah Carey. Furthermore, as "On Bended Knee" snatched the number one spot away from "I'll Make Love to You", Boyz II Men became part of an even smaller crème de la crème that includes The Beatles and Presley only, being the third artist ever to beat their own spot at number one on the Billboard Hot 100 charts.

Like fine wine, Boyz II Men's have evolved as live performers. Enchanting, engaging, and intoxicatingly sweet soul-sounding than ever before. Don't miss this amazing show. Get your tickets now!