The Unheavenly Skye Tour brings Coheed and Cambria & Mastodon together for one hell of a co-headliner show! Coming to Freedom Hill Amphitheatre on Tuesday 11th June 2019, the tour sees Coheed and Cambria performing from Vaxis – Act I: The Unheavenly Creatures (2018), their most recent album in the Amory Wars saga, and Mastodon will be performing their fourth studio album, Crack the Skye, in full! Joining the two epic bands will be Every Time I Die in support! 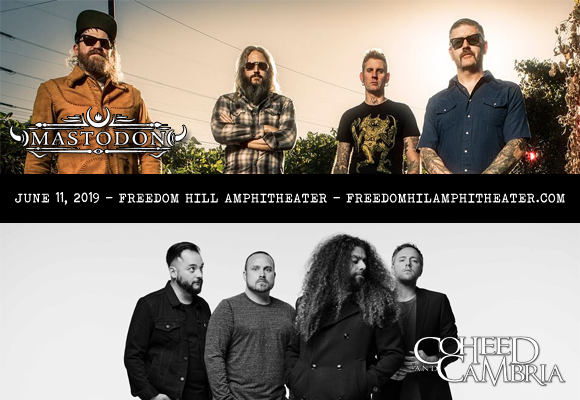 American heavy metal band Mastodon formed in Atlanta, Georgia in 2000. Consisting of Troy Sanders (bass/vocals), Brent Hinds (guitar/vocals), Bill Kelliher (guitar), and Brann Dailor (drums/vocals), the group released its debut album, Remission, in 2002, but it was 2011's The Hunter that brought the band mainstream success, debuting at number 10 on the Billboard 200. To date, the band has released seven studio albums, and has won one Grammy Award (Best Metal Performance for Satan's Curse – the opening track of 2017's Emporer of Sand) from five nominations. Their most recent release is the 2017 EP Cold Dark Place.