Catch the Goo Goo Dolls as they bring all of their biggest and best material to date to the stage on their unmissable Miracle Pill tour for 2021! As they travel the world this Summer, they will also be performing an exclusive collection of North American shows! With support from the Lifehouse – you can be there! Book your tickets for Goo Goo Dolls LIVE at Freedom Hill Amphitheatre on Sunday 8th August 2021! 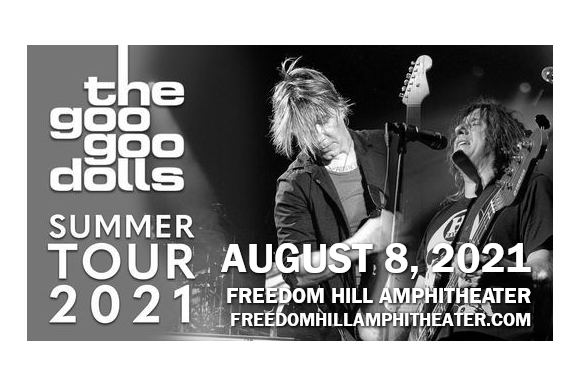 As one of the most popular bands in mainstream rock music, The Goo Goo Dolls have taken over the charts time and time again with their unforgettable tracks ever since they first came to light in 1986. Formed in New York, this talented group have stormed the world and become an international name, best known for their groundbreaking singles such as the iconic "Iris" plus "Slide", "Name" and "Naked" from 1995's A Boy Named Goo; "Black Balloon", "Dizzy", "Better Days", "Give a Little Bit", and "Stay with You" – just to name a few!

Throughout the decades Goo Goo Dolls have produced hit albums and have hit sales of over twenty million worldwide, including their nineteen chart topping singles from many of the songs listed above. But nothing has triumphed as much as "Iris" which still remains to be their biggest anthem to date as it hit the number one spot on the Billboard charts and became one of the biggest from the entire decade!

As they have made their mark on music history, the Goo Goo Dolls have taken their tours to all corners of the earth and continue to have a steady ever loving fan base where-ever they go. This time they are performing in the US for a night to remember as part of their Miracle Pill dates! If you can't get enough of Goo Goo Dolls then be sure to book your tickets for their exclusive concerts and make your summer an unforgettable one – there's no time to lose as who knows when this opportunity will arise again!