11-time Grammy Award-winning R&B superstar John Legend comes to Freedom Hill Amphitheatre on Thursday 2nd September 2021 on the Bigger Love Tour! The Voice coach and reigning winner of People's Sexiest Man Alive will be bringing his charm, charisma and undeniable musical talent to the stage with a set of the dreamiest love songs to get fans in the mood, including his number one hit, “Conversations In The Dark!” Of course, Legend is one of the rare few to have won an Emmy, Grammy, Oscar, and Tony award, and it's clear to see why when you get the chance to experience this gifted performer live – his artistic flair is plain to see, and every live show comes with a crackle of electricity in the air! 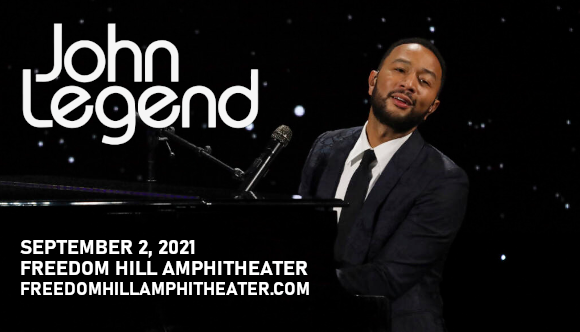 American singer, songwriter, producer, actor, and philanthropist John Legend first made waves in music in the early-2000s through his connections with Kanye West, who signed him to West's label, GOOD Music, as well as his features on a variety of songs by other established artists, including playing piano on Lauryn Hill's 1999 hit "Everything Is Everything". His 2004 debut album, Get Lifted, was an instant hit, debuting at number seven on the Billboard 200 and won him three Grammy Awards, including the 2006 Grammy Award for Best R&B Album, Best New Artist and Best Male R&B Vocal Performance for his single "Ordinary People". His first four studio albums peaked in the top five of the Billboard 200, and Legend soon became a bona fide R&B star. To date, Legend has won 11 Grammy Awards, and has been honored with numerous other awards and accolades, including the Hal David Starlight Award from the Songwriters Hall of Fame, the Academy Award for Best Original Song and Golden Globe Award in 2015 for co-writing the song "Glory" from the film Selma, and a Tony Award for co-producing Jitney for the Broadway stage. He also received a Primetime Emmy Award nomination for his acting role in Jesus Christ Superstar, and won for his role as a producer of the show, making him one of 15 people and the first black man to have won an Emmy, Grammy, Oscar, and Tony (EGOT).