This is not just your ordinary party down the block, it's the Kiss Block Party 2019! What makes this party the talk of the town? The headlining acts are the whos-who that gave urban and R&B music that extra "umph". Their distinct sound propelled them to stellar status during the 90s and beyond. This year's Kiss Block Party features Monica, Dru Hill & Jagged Edge, and they're up to deliver some groovin' and head-bobbing-inducing sounds at the Freedom Hill Amphitheatre on Saturday 22nd June 2019. Get your tickets early, or else you'll just end up kissing this party gig goodbye. Book your tickets now! 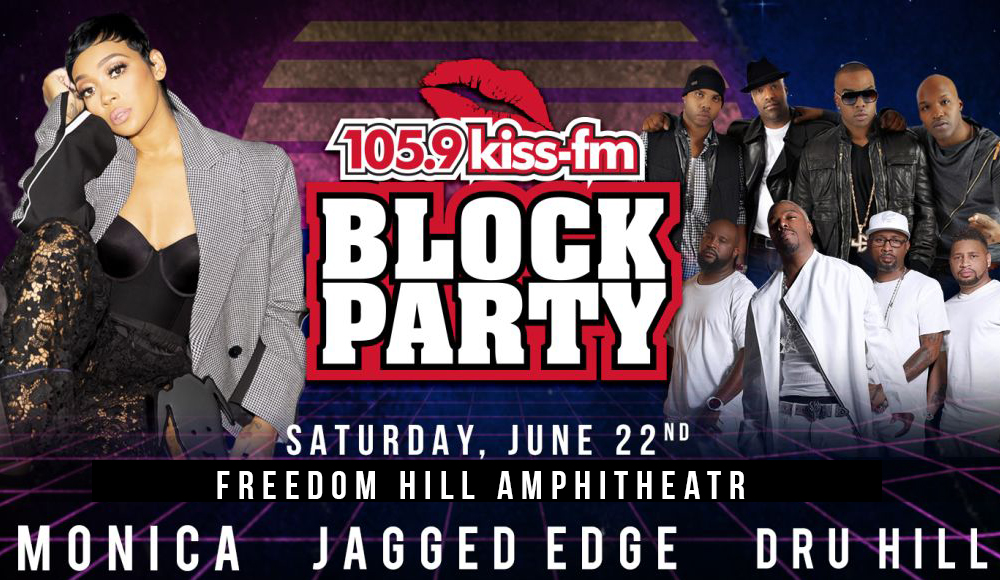 105.9 KISS-FM PRESENTS THE KISS BLOCK PARTY FEATURING MONICA, JAGGED EDGE & DRU HILL. These names alone are truly headline-worthy. They are all party of the urban R&B movement but each one throws in a distinct flavor that set the tone and pumped up the volume during the 90s party vibe. To this day, we still feel the aftershocks of the intense impact and sphere of influence in present-day generation.

Monica's 1995 debut album "Miss Thang" spawned hit singles such as “Don’t Take It Personal (Just One of Dem Days)” and “Before You Walk Out of My Life”; and jumpstarted her collection of American Music, Soul Train and Billboard Awards. The sophomore album, "The Boy Is Mine," gave Monica that superstar status as the title track, which is a duet with Brandy, hit a whopping 13 record-breaking weeks at #1 on the Billboard charts. As if this was not enough, the duo also made their way to the Grammy Awards stage to claim this much-coveted recognition. Three more smash singles boosted the album's sales and chart success, namely “The First Night”, “Angel of Mine” and “For You I Will” (Space Jam Soundtrack).

Identical twin brothers Brandon and Brain Casey, and mates Kyle Norman and Richard Wingo are collectively known as Jagged Edge. In 1998, their stunning debut album "A Jagged Era", hit theTop 20 R&B and Top 40 pop positions with the hit single “Gotta Be.” Jagged Edge have a bunch of million-plus-seller albums to their name. They solidified their reputation in the r&b scene with hit singles such as “Let’s Get Married” and “Promise.”

With Dru Hill completing the pack, this is the ultimate R&B party ever! Don't dare miss it!