Somehow, Lindsey Stirling manages to fuse theatrical performance, flamboyant choreography and virtuoso musical talent without any pretension. She is utterly peerless with straying into the realms of novelty and is delightfully accessible, considering she has carved out her own niche. This summer, Stirling comes to Freedom Hill Amphitheatre on Thursday 12th August 2021 as part of her Artemis Tour, which takes its name from her concept album of the same name! Join the magnificent dancer and violinist as she takes her audience on an immersive, musical quest! 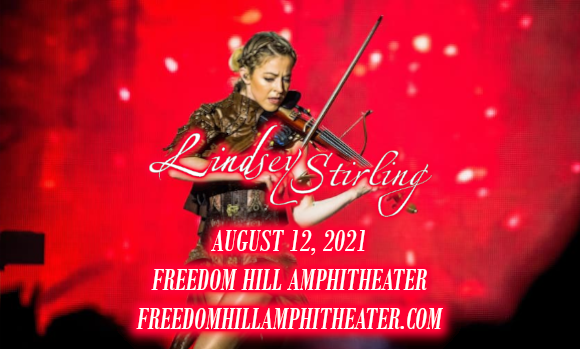 Driven, daring and delightfully different, Lindsey Stirling has forged an utterly unique creative path for herself, birthing a brand new style of performance and a brand new genre of music in the process. Weaving together the threads of her many talents – violin, singing, songwriting, composing, dancing and video editing – into one stunning tapestry, the one-of-a-kind performer offers the complete package, and one that has grown in both ambition and quality since she first appeared as a quarter-finalist on the 10th season of America's Got Talent. Another one of her many talents is organically growing a loyal and avid fanbase; Stirling began uploading videos to YouTube after her stint on the show and has since amassed 12.7 million subscribers to her channel and over 2 billion views. Her eponymous debut album came in 2012 and has been followed by four more over the years. Each album has hit the top spot on the Billboard Classical Albums chart and, proof of her wide appeal, several of them have also reached the top five on the Top Dance/Electronic Albums, Independent Albums and Billboard 200 charts, with several of them landing the top spot on several charts simultaneously. In 2019, Stirling released Artemis – her most recent album – which features collaborations with Elle King and Evanescence's Amy Lee.