EVENT CANCELLED. We regret to inform you Maren Morris has cancelled her scheduled 2021 tour. Please request a ticket refund from your point of purchase.

Chart-topping country singer Maren Morris comes to Freedom Hill Amphitheatre on Thursday 27th August 2020 on her RSVP Tour – her biggest headlining tour yet! The trek is in celebration of her second and most recent studio album, Girl, which won the 2019 CMA Award for album of the year, and launched the number one hit “The Bones”! It's a big year for Morris for many reasons – not only is she embarking on an extensive stint across the US, but she's also become a mom for the first time with husband and fellow country singer Ryan Hurd, who'll be joining her as a support act, as will James Arthur and Caitlyn Smith! 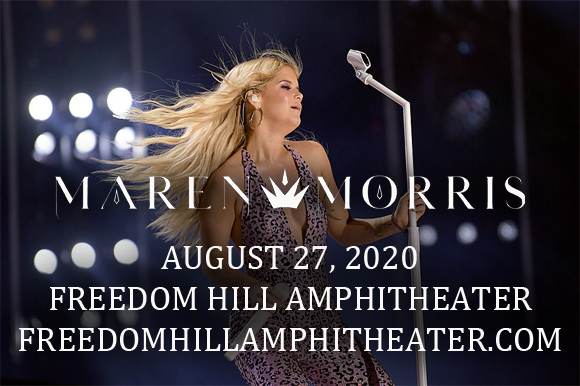 Maren Morris' love affair with music began at a young age – she started playing guitar at 12, and by 15 had released her independent debut album, Walk On. The country singer released her second album, All That It Takes, two years later while she was a student at the University of North Texas. After the release of Live Wire (2011), her third independent album, she moved to Nashville, Tennessee to pursue music full-time. During those first few years in Nashville, Morris wrote songs for several other country artists, including "Last Turn Home" on Tim McGraw's 2014 album Sundown Heaven Town, and "Second Wind" on Kelly Clarkson's 2015 album Piece by Piece. After releasing a self-titled EP via Spotify in 2015, gaining 2.5 million streams on Spotify in a month, Morris was signed to Columbia Nashville. The EP was re-released later in 2015 and its lead single "My Church" became her breakout hit, suddenly propelling Morris to stardom. The song peaked at number one on the Country Digital Songs chart in 2016 and reached the top five on the US Hot Country Songs chart, as well as winning her a Grammy Award for Best Country Solo Performance. Her major-label debut album, Hero, was released in 2016, hitting the top spot on the Top Country Albums chart and number five on the Billboard 200, as well as earning Morris four Grammy Award nominations at the 59th Annual Grammy Awards, including a nomination for Best Country Album. Her second major-label album, Girl, was released in 2019 and peaked at number four on the Billboard 200.