Papa Roach fans! The alt-metal heroes are headed out on tour to promote their most recent studio album, Who Do You Trust?, coming to Freedom Hill Amphitheatre on Friday 16th August 2019 with a ton of hot new material! Ready to rock your world, the high-energy performers will be joined by an epic support line-up of special guests Asking Alexandria and Bad Wolves! Tickets available now!!! 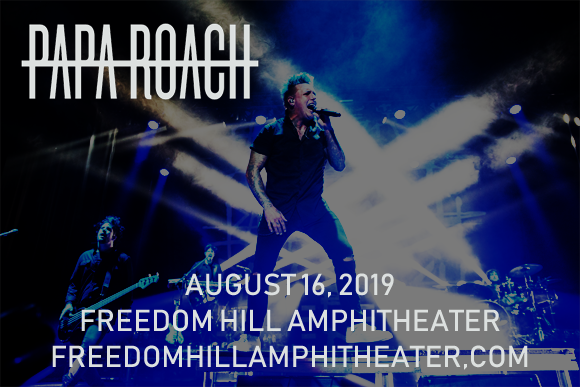 American rock band Papa Roach formed in Vacaville, California in 1993. After self-releasing four EPs in their early years, the band was signed to DreamWorks Records in 1999. The band's major-label debut, Infest, was released in 2000, selling 30,001 copies in its first week of release and was eventually certified triple-platinum by the RIAA. They maintained their success with 2002's Lovehatetragedy, which was certified gold, and Getting Away with Murder (2004), which was certified platinum. To date, Papa Roach has sold more than 20 million album copies worldwide. The band is best known for its songs "Last Resort", "Between Angels and Insects", "She Loves Me Not", "Getting Away with Murder", "Scars", "Forever", "Lifeline", and "Face Everything and Rise". Their ninth studio album, Who Do You Trust? is released on January 19th, 2019.