Come and catch Primus live in concert like you have never seen before! As they pay their tributes to one of their greatest influences, Rush and perform 'A Tribute to Kings' live. This unique opportunity to combine your love for Primus and Rush is on it's way and will be coming to Freedom Hill Amphitheatre on Wednesday 22nd September 2021 (Rescheduled from Saturday 17th July 2021) – book your tickets while you still can for this dedicated tribute. 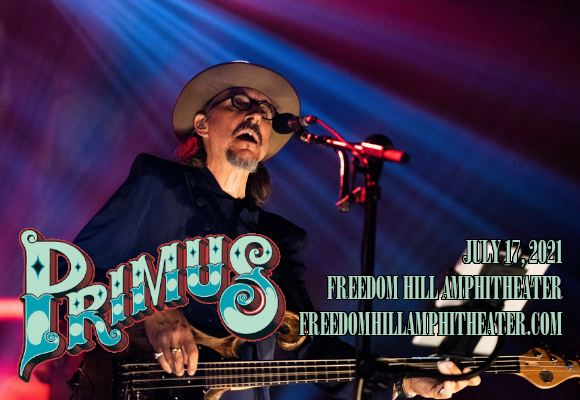 Primus have truly made their mark on music history, with their unique twist on the Funk Metal scene with their unstoppable career that has spanned over the last thirty six years. The band that currently consists of bassist/vocalist Les Claypool, guitarist Larry "Ler" LaLonde and drummer Tim "Herb" Alexander have given to the world epic and outlandish tours.

With their long standing influence on the scene, Primus first started all the way back in 1984 as they started to create the project together and perform on the Californian live music scene. After forming a strong unit, Primus produced a list of incredible albums including; Fizzle Fry, Pork Soda and Tales from the Punchbowl and more. With their dedicated fan base within the progressive rock and alternative metal scenes, Primus have become one of the best and most talented groups around.

Now in 2021 and with the recent news of the passing of Rush's influential rock drummer Neil Peart, Primus have decided to give their fans as well as Rush fans a tribute to their iconic legacy. Primus will be embarking on a tour like never before as they will be bringing a performance of the Rush 1977 album A Farewell to Kings – played in full. Their concert dates will also include a set of their own material also. As Rush is one of Primus' biggest heroes, it makes perfect sense for their upcoming shows.

As they honour Rush's music, Primus are known to be one of the most talented and technically flawless bands, so if anyone could pull this experience off, it would be them. With Claypool's blessing, the announcement has now been released and the dates have been set – join them as they head down to Freedom Hill Amphitheatre this summer!

“A little over one year ago, Ler LaLonde and I started kicking the idea around of Primus performing a series of shows featuring an iconic Rush album from our youth… Being that A Farewell to Kings was the first Rush record I ever heard, and that it contains my all-time favorite Rush tune, Cygnus X1, the choice narrowed quickly."