Steve Martin & Martin Short bring The Funniest Show In Town At The Moment to Freedom Hill Amphitheatre on Friday 11th September 2020! A magnificent, all-singing, all-dancing, hilarious double-act, Martin and Short thrilled audiences with their sold-out tour An Evening You Will Forget for the Rest of Your Life, which spawned an Emmy Award-nominated Netflix special, and now they're back for more joyous mayhem! The pair are each accomplished performers and shine both together and separately in this spectavcular variety show! 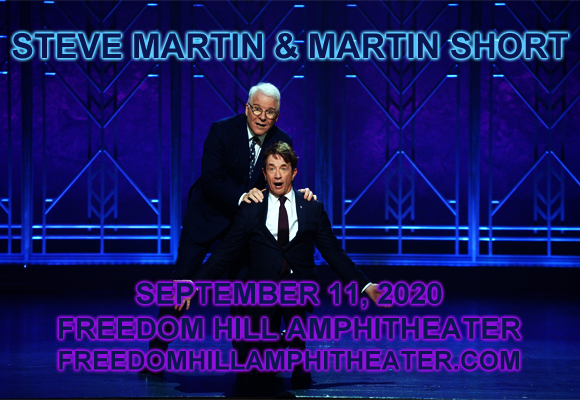 Two of the Three Amigos, Steve Martin and Martin Short are veteran comedians, actors and multi-talented performers who first met on the set on the 1989 film (alongside Chevvy Chase) and became firm friends. Over the years, both have individually had hugely successful careers in the industry, and in 2016 they reunited to tour as a double-act, combining their chops for a variety show called An Evening You Will Forget for the Rest of Your Life. The show was recorded as a Netflix special that was nominated for three Primetime Emmy Awards proving that their chemistry as a team, coupled with their prowess and skill as singular performers, is as captivating as ever.

Martin came to fame in the 1970s as a world-renowned stand-up comedian, but branched away from comedy after the 1980s, becoming a successful actor, author, playwright, pianist, and banjo player. His diversification has earned him Emmy, Grammy, and American Comedy awards over the years, among other honors, and in 2013, he was awarded an Honorary Academy Award at the Academy's 5th Annual Governors Awards.

Short came to fame as a favorite on Saturday Night Live, before making a career in feature films. He is also a Tony, Theatre World Award and Outer Critics Circle Award-winning stage actor, and has taken home both a Primetime and a Daytime Emmy Award.