Young The Giant & Fitz and The Tantrums Tickets

Young The Giant fans, listen up!! Your favorite band is hitting the road in 2019 with the massive Mirror Master North American tour!! Featuring special support from Fitz and The Tantrums, they’re bringing their incredible live show to the Freedom Hill Amphitheatre on Saturday 29th June 2019 – be there!! Tickets on sale now and selling like hot cakes – get ‘em while they last!! 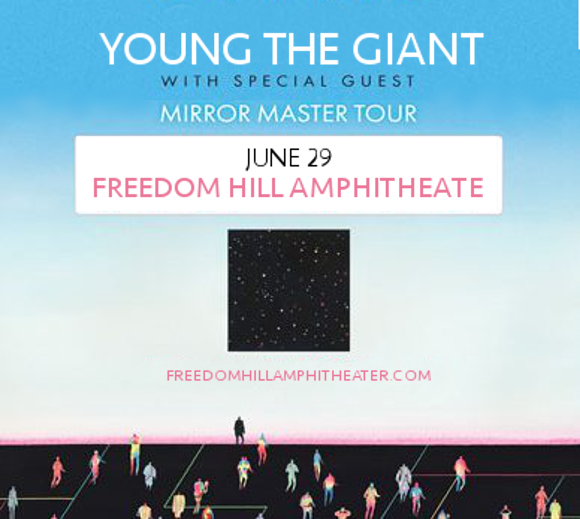 Formed in 2004, and currently consisting of Sameer Gadhia, Jacob Tilley, Eric Cannata, Payam Doostzadeh, and Francois Comtois, Young The Giant rose to prominence with their debut 2010 studio album, with three singles charting on the US Alternative Songs chart. Their latest album, “Mirror Master,” is their fourth. Acclaimed by critics and adored by audiences, the latest Young The Giant record focuses on themes of personal development and change.

"Within one single day, we're all so many different people. Especially with the use of social media, we're not just living in the now — we're living on several different timelines simultaneously,”said singer Sameer Gadhia, talking about some of the central themes of the album. "A lot of the album came from thinking about how we have all these separations within ourselves that allow us to go about our day. We don't have to be a certain thing; we can contradict ourselves and show all these different sides of who we are.”

Well, what are you waiting for?? Those tickets aren’t going to last, so get yours before they disappear and get ready for an amazing concert that you’ll never forget!