With her unique blend of soul, hip-hop, jazz and classical music, and soaring, dynamic voice, Alicia Keys is one of the world's most notable and enduring artists, and this year she returns to touring for the first time in seven years! The 15-time Grammy Award-winner will be performing at Freedom Hill Amphitheatre on Tuesday 16th August 2022 (Rescheduled from Tuesday 17th August 2021), where she'll thrill and delight fans with a show that celebrates and explores her music, including hits like "Fallin'," "You Don't Know My Name," "Empire State of Mind," and tracks from her most recent album, Alicia, including "Underdog!" 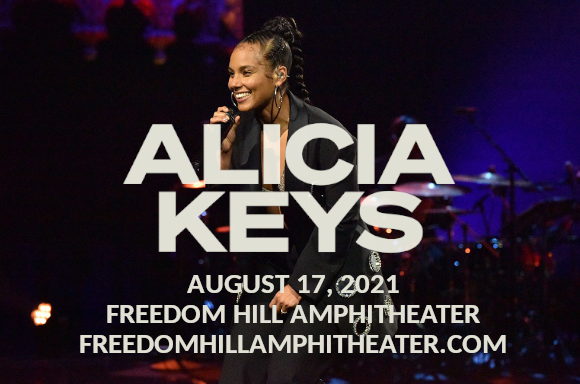 15-time Grammy Award-winning singer/songwriter/producer, Alicia Keys began her music career as a teenager, and blazed a trail with her debut album Songs in A Minor, which was certified six-times platinum by the RIAA, and produced a number of hits, including her first Billboard Hot 100 number-one single, "Fallin'". The album introduced her as a star who would change the face of pop and R&B music, and over the years she has done exactly that. Keys has released six studio albums in total, four of which have reached number one on the Billboard 200, and two of which charted at number two, with all of them gaining platinum or multi-platinum certification. Her seventh studio album, ALICIA, is released in 2020.