It's been three whole years since Deftones last took to the road, and now the legendary alt-metal band is making a summer that's already stacked with epic shows even better! The iconic group will be performing brand new material from its upcoming ninth studio album, which is slated for release later this year! Chino Moreno and co. are still experts at creating an enthralling, sonically explosive atmosphere at their shows, so make sure you don't miss out – they're headed to Freedom Hill Amphitheatre on Tuesday 24th May 2022 (Rescheduled from Sunday 15th August 2021) with Gojira & Poppy in tow as support! 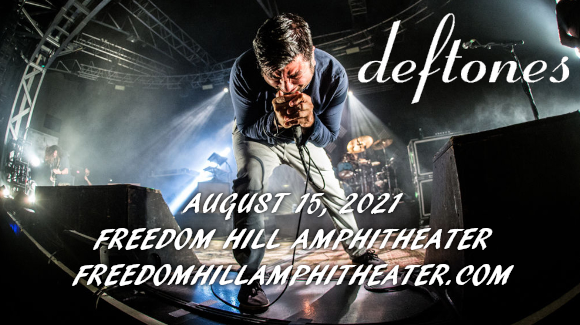 With its emotive, experimental take on metal that combined elements of shoegaze, dream pop and hardcore punk, Deftones led the charge for a new type of alternative metal, earning themselves the title of "The Radiohead of Metal". The group first formed in 1988 in Sacramento, California, and began to tour extensively from 1993, when it settled on a solid line-up. Through this dedication to performing, the band grew a following that helped its debut album, Adrenaline (1995), eventually sell over 220,000 copies. In 1999, the group released its hotly anticipated follow-up, Around the Fur, which launched two successful singles: "My Own Summer (Shove It)" and "Be Quiet and Drive (Far Away)". This taste of success meant that 2000's White Pony was even more eagerly awaited, and it ended up reaching number 3 on the Billboard 200 and launched the single "Change (In the House of Flies)," which reached number 3 on the Alternative Songs chart. The album also won Deftones the Grammy Award for Best Metal Performance for the song "Elite." To date, the band has released eight studio albums, five of which have charted in the top five of the Billboard 200.